Billy Porter reminds us that LGBTQ people made the difference in the election. But the work’s not done yet. / LGBTQ Nation 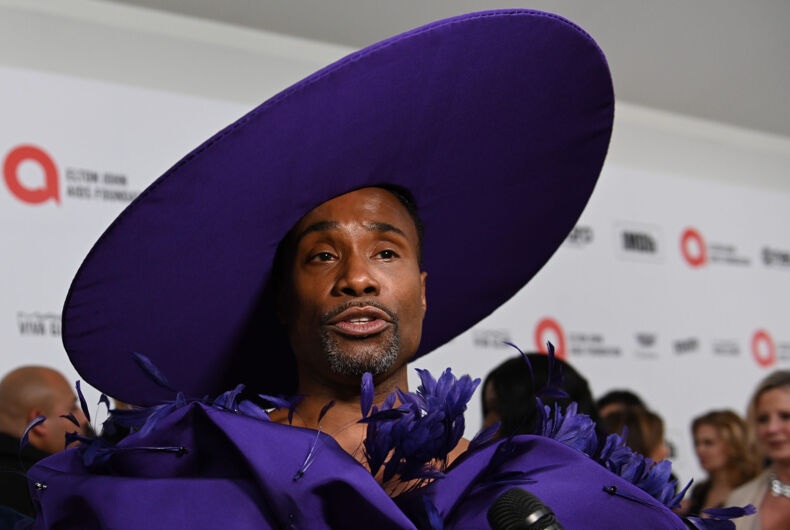 The LGBTQ community made a major impact on the outcomes of the 2020 election season. LGBTQ Nation analysis of data revealed that without LGBTQ voters in key states, Donald Trump likely would have won reelection as President, for example. Further reviews have also concluded that Trump could have won again, if not for the force of LGBTQ voters all over the country.

Billy Porter doesn’t want you to forget. He’s working with GLAAD to remind everyone that LGBTQ voters, organizers, and groups like GLAAD made the difference in what was considered the most pivotal election of our time.

Related: These queer organizers in Georgia are working overtime to flip the Senate blue

In a new video, the Pose star himself narrates a review of the tireless work that GLAAD committed to during the 2020 primary and general elections. The two-and-a-half minute spot highlights “the LGBTQ community’s impact on the 2020 general election, as well as the impact we are posed to have in the Georgia run-off,” GLAAD announced.

“After five primary debates without a single question about LGBTQ health care protections, workplace discrimination, violence against the community or support for the Equality Act, GLAAD deployed thirty years of media expertise to amplify the LGBTQ voice in the election conversation,” Porter explains.

He lists their media guide for journalists, petitions to debate moderators, and self-hosted Presidential Forum in Iowa as examples of the group “spotlighting LGBTQ issues on the national stage.”

“GLAAD went into combat mode against rampant lies and disinformation,” Porter continues, “with daily media pushback from its news and rapid response team, pre-election polling, and a heart-wrenching ad that aired on Fox News.”

“GLAAD led the charge to turn out LGBTQ and ally voters,” says Porter, “resulting in the biggest LGBTQ turnout ever.”

“Because of GLAAD, the voices — and the votes — of LGBTQ people and their allies were heard loud and clear at the ballot box, and GLAAD will continue to lead the fight for equality and acceptance,” Porter concludes.

Yet, the extent of progress for LGBTQ rights under incoming President Joe Biden’s administration remains uncertain. It all depends on if Democrats can take hold of the Senate by winning the runoff elections for Georgia’s two seats on January 5.

If either incumbent — Kelly Loeffler or David Perdue — were to defeat their challenger — Rev. Raphael Warnock or Jon Ossoff, respectively — Republicans would retain control of the Senate. That means current Majority Leader Mitch McConnell would remain in charge of the chamber’s agenda.

If both Loeffler and Perdue lose, there would be exactly 50 Republican and 50 Democrat Senators in the next Congress. That would allow Vice President-elect Kamala Harris to cast the deciding vote to end tiebreakers in the chamber, and giving pro-LGBTQ legislation like the Equality Act a chance of passing.

As Porter says, “the election is over, but GLAAD’s work goes on.”

That’s why GLAAD also announced that it will undertake yet another text messaging campaign this week, hoping to encourage millions of potential voters to make that difference yet again. They are working with LGBTQ organization Georgia Equality and VoteAmerica to reach as many voters as possible before polls close next Tuesday.

“Join millions of people supporting diversity and inclusion by voting in the Jan. 5th Senate runoff,” the sample text messages shared with LGBTQ Nation read. “Early voting is open now,” they remind readers, before encouraging them to find their nearest polling location and other information on the runoffs at GLAAD.org/georgia.

“The texts will continue through December 30 when early voting ends in select locations,” GLAAD said in a statement.

Earlier this month, the anti-LGBTQ records of Sens. Loeffler and Perdue were published to GLAAD’s Trump Accountability Project, also in collaboration with Georgia Equality. They found that Loeffler donates her salary to an anti-LGBTQ group and has close ties to the Family Research Council, a hate group, while Perdue has earned praised from the Council and the Family Policy Alliance, a lobbying front for another anti-LGBTQ hate group, Focus on the Family.

Neither have voiced support, or even acknowledged, the proposed Equality Act, GLAAD points out. Both Ossoff and Rev. Warnock support it.

That’s part of why GLAAD is working just as hard to get the vote out in the Peach state — and so far, early voting numbers reflect higher turnout than in November’s election.

“The general election began with a lack of attention given to LGBTQ issues and pivoted to the Trump Administration falsely positioning itself as LGBTQ-affirming in a shameless effort to court LGBTQ voters and our allies,” GLAAD President and CEO Sarah Kate Ellis told LGBTQ Nation.

A post-election poll by GLAAD found that Trump only earned 14 percent of the LGBTQ vote, which was the same as he had in 2016. By contrast, Joe Biden earned 81 percent of the community’s vote.

That contradicted a previous analysis that determined that Trump had doubled his LGBTQ support in this election, based on an exit poll using a much smaller sample of LGBTQ respondents.

“Combatting that false narrative and growing visibility for LGBTQ issues became centerpieces of GLAAD’s largest election campaign ever,” Ellis said. “LGBTQ voters turned out in historic numbers and it’s thanks to our community, along with other diverse Americans, that pro-equality candidates crossed the finish line.”

GLAAD found that approximately 93 percent of LGBTQ identifying people voted, and 25 percent did so for the first time.

“Now, we must join together to secure another win for equality in the Senate run-off,” Ellis said, because “the Equality Act, an end to the trans military ban, and rollbacks of other recent anti-LGBTQ policies can become realities” after “years of advocacy.”

The Capitol was vandalized during the 1/6 riots.Photo: Shutterstock An 18-year-old lesbian…