A lovely rhyming story shows diverse people and families, including one with two dads, as it seeks to inspire a lifetime love of reading. It’s also available in four different bilingual editions! 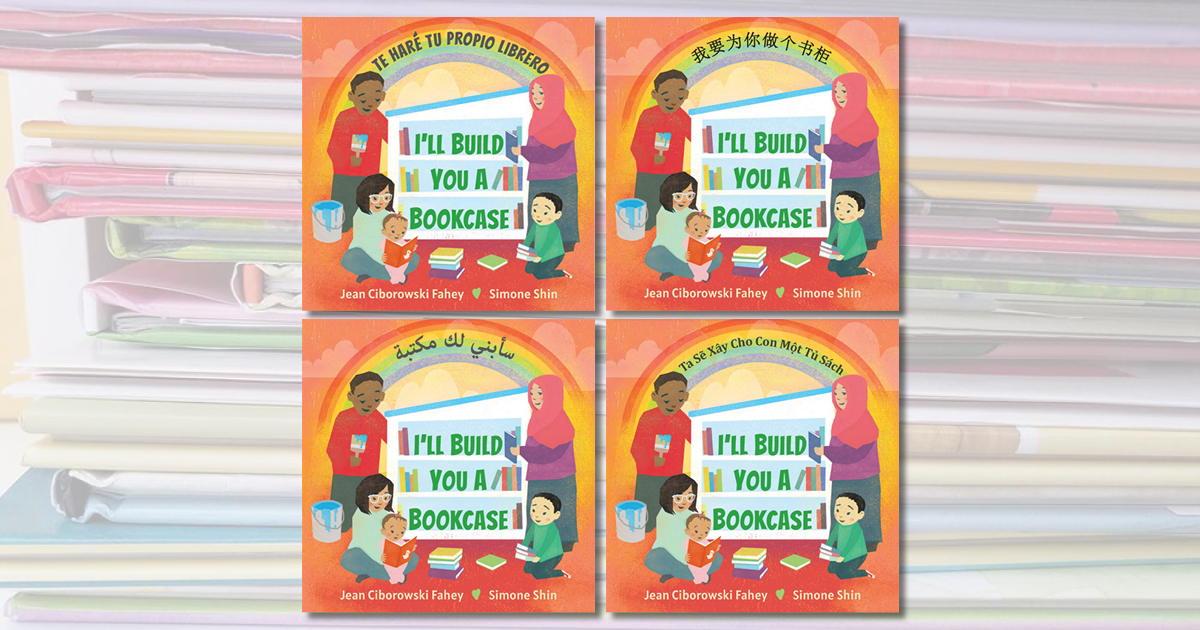 “I’ll build you a bookcase before you are born / that’s made out of boxes from shoes that were worn,” says a pregnant Black woman at the beginning of I’ll Build You a Bookcase, by Jean Ciborowski Fahey and illustrated by Simone Shin. On the next spread, two White dads watching their infant pick up the story, “for books we will read in the soft morning light / and books we will read before saying good night.” Each subsequent spread introduces us to parents building bookcases and sharing something about how they’ll interact with their children around them—filling them with library books, putting their phones away while they read, exploring the world through books, and reading the same story “for the tenth time.” One spread touts building bookcases for other kids, too, and subsequent pages show neighborhood library boxes being enjoyed by adults and children in the community.

The people depicted have a variety of skin tones and range in age from infant to elderly. We see the two-dad couple as well as a mom-dad one, single parents, and grandparents. There are no obviously queer women in it, but one woman wears overalls and dons an Amelia Earhart-style pilot’s cap and goggles while playing make-believe with her child, giving her a lesbian-ish vibe (or maybe that’s just my wishful thinking). One child is in a wheelchair and two parents wear hijabs. Two final pages offer parents tips on “How to read with your child.”

The book is available in Spanish-English, Mandarin-English, Arabic-English, and Vietnamese-English editions. It came into being after innovation program OpenIDEO, with funding from the William Penn Foundation, launched the Early Childhood Book Challenge in 2019, “seeking an original story for children ages 0 to 3 that would inspire children and their caregivers to read together,” publisher Lee & Low explained. Fahey, an early literacy specialist and parent educator, submitted a story that was selected by a committee of literacy and family engagement experts. The publisher, Lee & Low, is selling the book through the usual online and offline channels—and the foundation’s funding will allow 25,000 copies to be distributed free to Philadelphia families with young children.

My only criticism is that the book feels aimed at an age (0 to 3 years) where a board book edition would have made sense. So far, however, the Spanish-English version is only available in hardback and the other editions in paperback. Nevertheless, it’s one of those books that would make a great first book gift for a family with a new baby. As a book nerd myself, I love books about books, and wish I’d had this celebration of diversity, community, and reading for my own son when he was a toddler.

(For another recent queer-inclusive kids’ book that features a free library box, check out The Little Library, which features a nonbinary librarian.)

The plot: Closeted political lawyer newly released from prison on a corruption…

Lesbian News
Indya Moore Is Just So Cute?? IDK, I Just Love Them?

Welcome to No Filter! This is place where I round up all…

Double proposals have become a very special tradition in the LGBTQ+ community.…