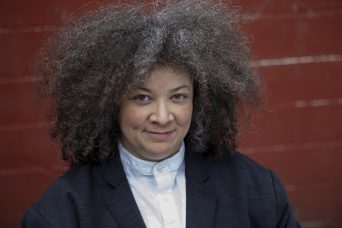 PAMELA MEANS, acclaimed singer-songwriter, jazz musician, and activist, has released, Pamela Means and The Reparations, “Live at Northfire,” her tenth album. An in-studio performance, recorded live, for a small group of fans, at Northfire Recording, in Amherst, MA.

“Live at Northfire” showcases six Pamela Means original songs. Primarily, politically-charged indictments of our sociopolitical landscape plus a dose of romantic reprieve from two mesmerizing ballads. For Means, an artist known for mastering many musically diverse projects with ease, this is the first release with a new empowered trio. A live set of punchy protest songs, primal, funky, focused grooves, and sultry queer love songs that will surely send a listener adrift on a soulful journey, soothing and searing, yet, still, speaking truth to power.

Pamela Means’s clever, concise lyrics, tender to raging vocals, and fleet-fingered fretwork are elevated with the thick bottomed bass lines, infectious conga beats and lush, velvet harmonies of bassist, Cinamon Blair, and, percussionist, I-SHEA. Pamela Means puts her gentle wit, big loving spirit and powerful songwriting to work for peace in the world. She just keeps getting better and better. Her voice is strong, her musicality is entertaining and her commitment to peace is deep, genuine and consistent.

Pamela Means, singer-songwriter with a penchant for protest songs, guitarist, vocalist, educator and social activist, is an Out and proud queer artist that cannot be musically contained. A conservatory-trained musician, Means also fronts her own jazz quartet, breathing life into classics once sung by Billie Holiday, Chet Baker and the like; performs the entirety of the album, The Beatles Abbey Road, solo acoustic, in celebration of its 50th anniversary, and now releases her tenth album, “Live at Northfire,” the first with new empowered trio, Pamela Means and The Reparations.

CINAMON BLAIR
bass, vocals
Cinamon Blair, bassist and support vocalist from the Empowered Trio, Pamela Means and The Reparations, is a singer, songwriter, bassist, musician, and composer who has been growing her creative expression over the past 30+ years. She loves to sing, play, vocalize harmonies and use music as a tool to self-soothe and build greater connections, to educate and activate herself and the listener into whatever needs to happen. Music is part of our DNA and has real health wealth applications. Cinamon Blair is a collaborator by nature, consistently broadening her musical family, understanding and appreciation.

I-SHEA
percussion, vocals
I-SHEA is the percussionist and support vocalist from the Empowered Trio, Pamela Means and The Reparations. I-SHEA is an eclectic ARTist and musician aka ‘The Original Jewminican’ hailing from the source of hip hop and raised in the sauce of merengue, bolero, rumba, salsa, nyabinghi and West African rhythms. I-SHEA has lit up the east/west coast USA, Canada, Latin America, The Caribbean, and Africa, performing at legendary venues like Daniel Sorano National Theatre of Dakar, Nuyorican Poets Cafe, The Apollo in Harlem. She has opened up for Dead Prez, Sadat X (from Brand Nubian), and Morgan Heritage and has shared stages/performances with Howard Zinn, Rha Goddess, Rosario Dawson, Jane Fonda and Eve Ensler.

Lesbian News
Release date and how to watch the latest series

Dominique Jackson appears in season three as Ms. World, an incarnation of…