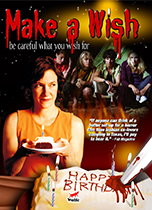 “If anyone can think of a better set-up for a horror film than lesbian ex-lovers camping in Texas, I’ll pay to hear it.” – FAB Magazine

“In the spirit of Friday the 13th, one by one the lesbians get the chop. First time filmmaker Ferranti creates fever pitch psycho-sexual tension, with lots of self deprecating humor thrown in. It’s about time we got our very own lesbian slasher!” –  London Lesbian and Gay Film Festival

Lesbian News
Get to know the (Her)oic EK Bayer – Lesbian.com

What is your writing life like? Do you write during the day,…