May her memory be a revolution – Lesbian.com 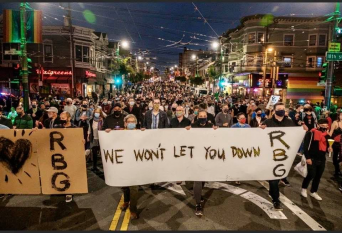 Pic of the Castro in San Francisco September 18, 2020 from the SF Chronicle.

BY ERIN BAYER
Special to Lesbian.com

May her memory be a revolution.

Between real storms and the proverbial ones, 2020 keeps getting unimaginably worse. As the impossible plot has unfolded, the very fabric of our nation has seemed to be tearing. We looked to the courts to hold us together. We listened for leadership, for a voice of unshakable reason, something solid to guide us through. We found the notorious RBG. She was the masthead of the most seaworthy liberal ship, guiding our fleet through these stormy seas.

Justice Ruth Bader Ginsburg famously said, “When I’m sometimes asked ‘When will there be enough [women on the Supreme Court]?’ and I say ‘When there are nine,’ people are shocked. But there’d been nine men, and nobody’s ever raised a question about that.”

From a small, unthreatening person came a voice so sharp and savage, it’s truth could not be ignored. In a culture where candor makes the best quick-witted memes, Justice Ginsburg’s written dissents have ignited a generation. I grew up with a sense of equality with my peers. We questioned gender norms, chose careers and loves, and felt ourselves generally overwhelmed by everything possible. The realities of glass ceilings, unaffordable childcare, and financial doors closed to the women and queer among us sunk in slowly. Another famous dissent by Justice Ginsburg articulated that discrimination often isn’t apparent at first, but only becomes clear over time.(Ledbetter v. Goodyear.) She made my own tired, disillusioned voice feel heard. She gave me hope.

Justice Ginsburg emerged as a vestige of truth, magnetic and necessary. And fun. Watching a diminutive woman speak truth to power is excellent fun. She was a lynch pin on the Supreme Court, and we looked to her to hold our country to account in the same way she held the highest court, with dignity and a laser-focus on equality. As she turned 87, we prayed she could hold out until the next election, our last chance to pull America out of its tailspin. We needed her voice, her strength, her clarity, her position.

I heard that she hung on for us as long as she could. Justice Ruth Bader Ginsburg passed away Friday, September 18. As I write, it’s only been two days. We mourn with her loved ones and larger circles of friends. The loss of her love and light will not be filled. With just 46 days until the presidential election, the country is reverberating, and a liberal front is panicking.

Ginsburg herself noted that while she didn’t choose the role of lone dissenter, she was willing to take it on when she saw the need. (RBG, movie.) That need for dissent has never been greater. RGB’s indomitable voice filled that need like she was born for it, but her journey to the Supreme Court was fraught and long fought for. Her dignity came from being a woman in a career dominated by ignorant men. To honor her journey, now is the time for all of us to pick up the torch.