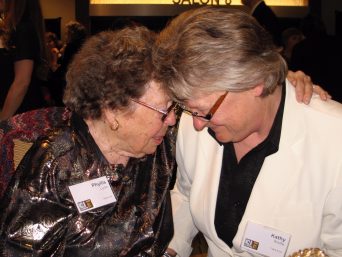 NATIONAL CENTER FOR LESBIAN RIGHTS
Our community shared a collective sadness with the news of Phyllis Lyon’s passing on April 9th at the age of 95. An indicator of how much the world has changed in her lifetime, her fierce and indomitable presence was celebrated and honored well beyond the LGBTQ community. We have linked to some of this national coverage below.

Phyllis and Del were the first same-sex couple to be married in San Francisco on June 16th, 2008. Merely weeks later, Del passed away at age 87 with Phyllis by her side. What came before that moment was decades of activism, boldness, humor and love.

This moment to celebrate Phyllis is also a moment to reflect. In 1955, Del and Phyllis were founders of the Daughters of Bilitis, the first lesbian civil and political rights organization. They were the first lesbians to join the National Organization of Women. Phyllis, once an administrative assistant to Rev. Cecil Williams at Glide Memorial Church, and Del played key roles in launching the Council on Religion and the Homosexual (CRH) and the Alice B. Toklas Democrative Club and, in 1979, became the namesakes of an activist-created health clinic, Lyon-Martin Health Services. These are just a few examples of their activism and involvement.

As a feminist-founded organization, NCLR stands on the shoulders of Phyllis and Del. At our inception in 1977, the women’s rights movement and the Gay movement were changing the political landscape, but lesbians had difficulty finding a seat at either table. Phyllis Lyon was just what we needed. When Donna Hitchens founded NCLR, it was to meet the immediate and dire needs of women losing their children because of their sexual orientation. Today, NCLR’s mission is to hold the heart and create equity for our entire LGBTQ community. No one left behind. Period.

Phyllis Lyon knew no boundaries when it came to her intellectual and activist power and we are forever indebted to her for her bravery and leadership. She set an example for us all. We know for us at NCLR, we intend to do whatever it takes to follow her lead and hold up her legacy.