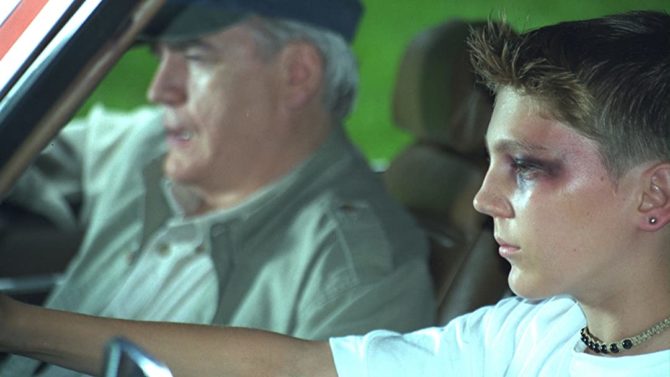 Actor Paul Dano made an auspicious leading man debut in this overlooked 2001 drama. In L.I.E., Dano plays Howie, a 15-year-old boy living in the suburbs of New York, recovering from the sudden death of his mother. His dad already has a new girlfriend only a month later, leaving Howie to fend for himself. Howie develops a friendship–and a sexual attraction–with Gary (Billy Kay), a gay hustler who leads him into a life of mischief, robbing neighborhood homes. One night the boys decide to rob the home of Big John (Brian Cox), one of Howie’s frequent Johns. When Big John catches the pair, he offers a sexual relationship with Howie in exchange for not going to the police.

More than that we’ll not reveal here, as L.I.E. has a rare form of dramatic tension and plot twists. That said, the movie isn’t for the faint of heart. The film’s subject matter–an ephebophile preying on young gay or questioning teens–would spark controversy in and of itself. But L.I.E. doesn’t stop there. Instead, it paints Big John as a somewhat sympathetic character: wrong, yes, but not cruel. He seeks a kind of friendship with Howie, one that would include a nurturing mentorship as much as sex. The film doesn’t excuse Big John’s behavior; in fact, the character seems more than aware that his compulsion is dangerous to the young men he meets. L.I.E. does something totally bold: it paints its character as a conflicted man.

Moreover, the film has the good sense to realize that teen hustling doesn’t “make” people grow up to be queer; rather, abusers have singled out LGBTQ-leaning kids for centuries as their targets, maybe because gay kids often don’t have the means to explore their sexuality, must live on the fringes, and because the stigma surrounding it makes them less likely to out their predator. Considering that statement is still a sobering one 20 years after the film’s release says a lot, both about the state of our culture, and about the movie’s audacity.

Brian Cox gives one of the bravest performances in all cinema history in the film, making Big John into a complex, and, at times, even likable man. Dano, in his first leading role, matches him every step of the way, and hints at the bravura performances he would later give in films such as There Will Be Blood. L.I.E. debuted at Sundance back at the height of the festival’s artistic daring.

With Sundance in virtual mode this weekend, we suggest this captivating, dangerous, enigmatic film for a weekend screening.