Sunrise in Halong Bay, Vietnam • Travel with Mei and Kerstin

It was raining cats and dogs when we arrived in Halong Bay. When we left Hanoi earlier that day, I had no idea we would need 4 hours to reach the Gulf of Tonkin. In Europe, we would have needed only 2 hours to reach a destination of 170 kilometers. But in Vietnam, things were a bit different, especially back in 2014.

Are we on a highway? Oh yes, of course this is one of the most popular highways in Northern Vietnam. Our guide Than sounded proud to be a Hanoi native. So, you cannot drive faster than 65-70 kilometers per hour on this highway? No, no. Not faster! The road is in a bad condition, there are too many motorbikes. And lots of holes. Look, look, here! As our guide pointed at a pothole, our driver suddenly hit the brake. And then accelerated again after bypassing the depression and a few motorbikes hunting from right and left.

You see over there? Now Than was pointing at roadworks in the distance. In a few years, there will be a new highway. Maybe in 2018, you can drive to Halong Bay in only 2 hours. Imagine, you will win 2 hours for one way! You won’t have to sleep in Halong Bay, when you visit us again in a few years. You can make a quick day trip to Halong and come back to Hanoi in the evening. You will save a lot of money and see more of Hanoi!

I looked at Kerstin and we both shot our guide a polite smile. I resisted the urge to explain that we wanted to stay a night in Halong Bay. That we didn’t like to rush when traveling. But I decided to change the subject and ask him about Hanoi’s architecture…

It is still raining, please wait in the “waiting room”. What waiting room, we asked. Oh, the room where you wait for me! I go get the tickets for your boat trip. And you wait here in the room, OK? When we walked into the “waiting room”, a brouhaha of dozens of different languages filled our ears. Hundreds of tourists were sitting and standing in the hall. Americans, French, Brits, Russians, Chinese, Germans… Despite the rain, the heat was still palpable. And in this jam-packed hall, sweat was running down everyone’s neck.

Do you think we’ll be on the same boat as all the tourists here? I sensed Kerstin’s worried tone and didn’t know what to answer. Well, I hope it will stop raining soon. Or what view of Halong Bay will we get?

I wasn’t done worrying when Than’s smiling face popped up behind our shoulders. Here, look, I have your tickets! We can go now. He pushed open the misted glass door and held up a rainbow colored umbrella over us. For a moment, I wondered if the travel agency revealed to all our private guides that we’re a lesbian couple. Clutched to our rainbow umbrella, we followed Than down to the dock. As we boarded the Victory Star Junk Boat, I swiftly heard my father’s voice in my head: never sleep on a boat! Never go on a cruise!

When my family fled Vietnam in December 1978, they became boat people. For eight months, they were “prisoners at sea”, sitting like sardines on the Tung An freighter, off the coast of Manila. Before being moved to Tara Island for four more months, waiting to be resettled overseas.

I was not on that ship. I was not part of the boat people. I was not a Vietnamese refugee, for I was born in Luxembourg a few years later. But growing up, I kept hearing my family’s creepy stories on the sea. My fear of the ocean could never be compared to that of my family’s, nor other Vietnamese boat people’s thalassophobia. However, the terror of a possible death in an ocean was great enough to make me swear I would never get on a cruise.

But then, the idea of spending a night on a boat, feasting on the spectacular seascape of limestone pillars, really tickled me. After all, it was just one night. Aboard a luxurious five-star junk, with only 32 cabins… absolutely human-scale and safe. And it’s not in a big scary ocean, but in a bay. A UNESCO World Heritage Site to be exact.

Are you OK? Kerstin shot me a worried look, snapping me out of my daydream. I grinned bravely and we entered our cabin. Our luggage was already waiting for us, next to an ebony bed. The sea breeze waltzed with the gilded curtains and uncovered a private balcony. I walked over to close the window and caught a glimpse of what seemed to be a sunbeam, fighting its way through the dissipating grey clouds.

When you come from a country as Lilliputian as Luxembourg, chances are that you get to hear welcoming words followed by an exclamation mark. Sometimes by a question mark. But usually an exclamation mark: Oh, you’re from Luxembourg! That’s unusual! How rare to meet someone from such a tiny country! But then, when you really come from a country as small as Luxembourg, you’re probably used to these exclamation marks. We usually simper, nod our head and say nothing more. That’s exactly what we did when the waiter of the restaurant onboard led us to our table.

Each couple had a dedicated table. Each table showcased the national flag of the guests’ country. All the other couples had a flag made of fabric. Ours was made of paper. Clearly it had just been printed less than an hour ago. I hope this is the right flag? The waiter asked nervously, before pulling out another red-white-blue flag from his pocket. Kerstin laughed out loud and said: No worries! This is the right flag. The one you’re holding in your hand is that of the Netherlands. They’re similar, but the blue stripe on the flag of Luxembourg is lighter. Oh yes, I see now! The waiter giggled, nodded his head a few times and finally withdrew to the kitchen.

The rain stopped after lunch. When we were getting ready to visit Vung Vieng fishing village, the sky was clearing up. The sunbeam that I’d seen earlier finally managed to find its way through the clouds.

From our junk boat, we climbed into a speedboat which brought us to a floating platform in the middle of Halong Bay. There, four by four we climbed into a bamboo boat, welcomed by a slender lady in a conical hat. When a couple of baby-boomers settled down behind us, the boat started to sway.

The noise of their orange life jackets squeezed between each other and against the vessel’s rim made us edgy. Is the lady strong enough to row our boat? Kerstin whispered in my ear that perhaps we should help her. What? To row? As I turned around, I was even more worried to see the face of an elderly lady hidden under the hat. But when our bamboo boat started to glide on Halong Bay’s emerald waters, she rowed faster and faster, overtaking the other boats.

None of us spoke. We were all savoring the sound of the wavelets pushing against our tiny boat. And marveling at numerous caves inside conical peaks, arches between towers made of limestone and hundreds of virgin islets and uninhabited islands…

The peace and quiet of Halong Bay ceased as soon as our boat approached the Hang Sung Sot caves. Hundreds of tourists were lining up at the grotto’s entrance. We were told to queue up behind them. The family of four in front of us were too polite to not let a group of French students jump the queue. Kerstin and I both agreed that they must be British. Or Buddhists. Or perhaps they didn’t want to offend any representative of France, since it was the French who discovered this cave in 1901?

Our British friends seemed to be familiar with speleology. Since Kerstin is a big fan of grottoes and caves, we decided to follow them for a while, listening to the father as he explained to his teenage son how the karst features were formed. We stopped more often than the other visitors but moved past those who were taking selfies with a massive rock formed as a phallus and lit by a pink spotlight.

The trip back to the Victoria Star Junk took place on a motorboat. It was shorter and faster. Still, I missed our lady friend who brought us to the cave. And regretted that we had not given her more tips for her hard work. A few hours later, we kept talking about her when we settled down on the upper deck. We guessed about her age, her name, the number of hours she had to row in a day, the number of passengers she had carried on her boat…

Slowly, the sun was setting across Halong Bay. Soft pink clouds settled above the faint outline of the limestone islets.

When I woke up at 5am the next morning, the pastel colored sky from the previous evening was replaced by hues of midnight blue. But on the horizon, I spotted a hint of orange. Catching a sunrise has always been a challenge for me. As a night owl, I get creative when the world goes to sleep. Kerstin always says that I write the best stories when the clock strikes midnight. So, I get to watch a sunrise only once in a blue moon.

Standing on our private balcony, I kept my eyes on the orange tinge, which soon turned into flaming red. It slowly stretched across Halong Bay, revealing one by one the many limestone pinnacles, looming out of the water. Fog patches began to dissolve. But the world remained bathed in silence. Kerstin discreetly joined me on the balcony. Together, we were glued to this blissful spectacle. A daily spectacle that is often overlooked… 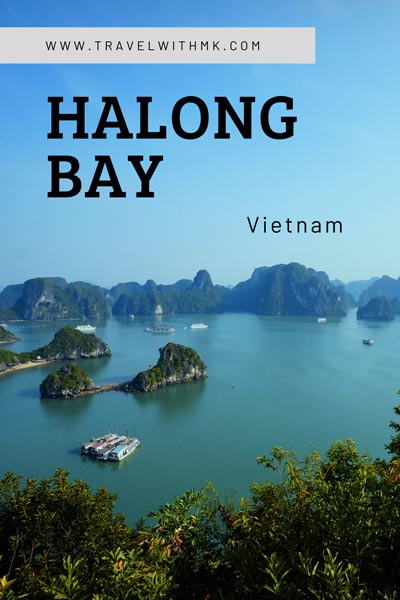 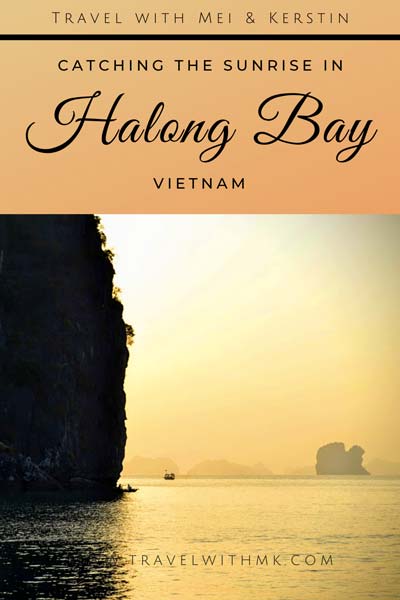 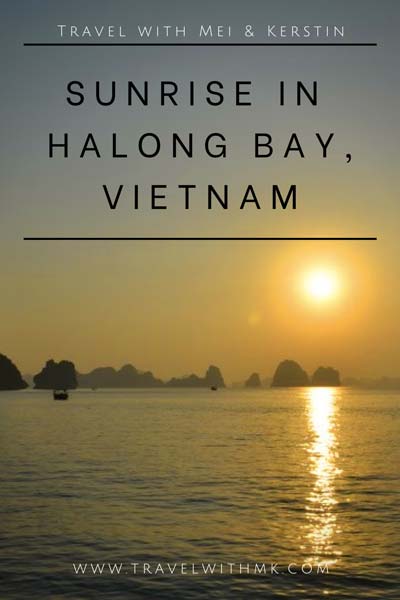 Now that more countries are opening back up for travel and fun,…

Bali is a classic gay travel destination in Southeast Asia. You might…

On northern edge of Massachusetts’ Cape Cod, between sea and sand, you’ll…