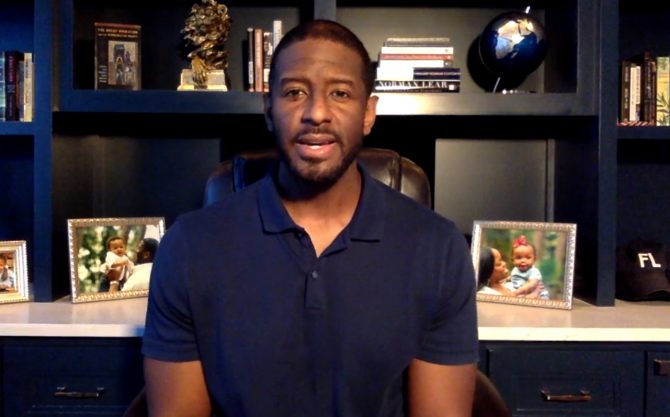 Gillum entered rehab following an incident in March where he was found drunk and naked in a Maimi hotel room. Two other men were also found at the scene, including a gay adult film actor and escort named Travis Dyson who had overdosed on crystal meth. Leaked photos of the scene show Gillum naked and passed out, as well as baggies containing a white powdery substance that resembles meth, though the contents were never officially identified. Police did not arrest any of the three men at the scene.

Now, in an 11-minute Instagram post, Gillum has opened up about his personal struggles. “I am thankful to so many of you who have wished me well during this especially challenging time,” Gillum said in the post. “I wanted to provide a personal update on how I have been doing. Take good care of yourselves during this season and I will see you on the other side.”

“I had totally underestimated the impact of losing the race for governor had on my life, and the way those impacts started to show up in every aspect of my life,” he also admits.

Of the incident in Maimi itself, Gillum doesn’t address specifics. “My stuff had to be public and cause great embarrassment and lots of rumors, some false, some true, the shame that I felt from all of that, from the harm I had caused was tearing me up,” Gillum confesses. “I needed real help to try to unpack that.” He adds that his wife “knows what I am and knows what I am not. She chooses to love me anyhow.”

Gillum entered the national stage as Mayor of Tallahassee in 2014. He lost the 2018 election for Flordia Governor to Ron DeSantis by less than one percentage point.