Hey butches and those looking to meet them, I tried out that Butch is Not a Dirty Word online dating event. The app that hosted it is called Flutter, and they make an attempt to have it feel organic, like you’re scoping the room at an in-person event looking for cool people to approach. Events take place at a certain time of day. When the event first opens, you’ll only be able to look at profiles and swipe. After a certain amount of time, chatting opens and you can talk to people but at midnight all your matches disappear, to encourage you to move conversations off the app.

Neat setup, right? Here’s how it broke down:

I don’t think I saw anyone who straight up did not have a bio. Hallelujah! You can select up to three prompts to respond to (I liked the prompts!) but the character limits are pretty strict and I felt like I had to leave out important stuff. Other than the fact that this app may not be for me because I tend to get wordy, I like people to know upfront that I’d prefer to have more than one life partner. There wasn’t an option to indicate polyamory or other potential dealbreakers, just the three prompts. Maybe I’m just spoiled from Lex, but it also didn’t seem like you could write very much?

How do you have a butch-focused anything in 2020 without a quality nonbinary option? Not sure, but Flutter did it. The initial gender options are men, women, and other. I clicked other, it then prompted me to select man or woman after. (That part is pretty common for apps, so they know whether to show you to someone seeking men or seeking women.) So I went with woman, because I’m woman-adjacent/part-time girl/whatever. However, my profile didn’t show “other/woman,” or “other,” or even a space to write in “none gender with left sapphic.” It just showed “woman” which was kind of icky, but the field where you type your name allows parentheses and slashes so I and a few others that I saw put (they/them) behind our names.

The other events are pretty concentrated to major cities, so if you live in NYC this might be great. Otherwise, people were pretty spread out – I saw some from Canada and I’m in the US – which might be an issue for some of you. I’m trying to leave my current town for grad school anyway so I didn’t care much, but if you’re looking to find someone local, this app may not work for you unless you’re in NYC. I didn’t see any straight girls looking for friends or lesbian-fetish het dudes, so maybe they haven’t invaded WLW Flutter yet. But I did get messaged first a few times, right at 7PM Central when chatting opened. Also, butches hot.

The only two I was able to find were age range and the gender you’re seeking. And I only figured out how to get to those because the page prompted me to loosen my filters after I went through the whole stack :/ (more points off from UI). It allows you to list your occupation, but you can’t filter profiles by it, nor for location, faith, smoking status, type of relationship, or other criteria.

The timed events idea is intriguing, and since everyone was on at once I tended to get responses fairly quickly. Whenever I tried to add a sixth picture it would delete the fifth one and trying to drag them into the right order was kind of buggy too. But you could just scroll down to see the profile, you didn’t have to pull it up in a new window or press and hold or anything, which is nice. But how do you find the filters? Before the event, the homepage had an “expired matches” section, but afterwards it disappeared?

If you’re in a major US city, you might have TONS of events (I saw one for ex-Mormons, NYC law students, etc). This might also be a good app for you if you keep forgetting to check your phone, want a break from always messaging first, or if you’re constantly on apps and want to tone it down to just one night a week. Your photos have to do a lot of the work of representing you since that character limit is so tight, so make sure you have some action shots of you baking/playing with your dog/rock climbing/etc. I might check in again if they hold another butch-focused event but overall, it didn’t quite work for me. 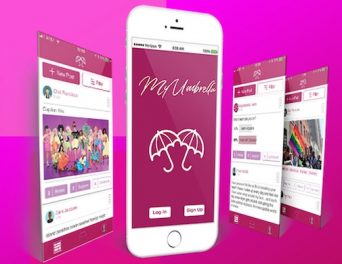 This pandemic has effected every person around the world. We’ve been thinking about what we can do to help during this difficult time. For the first time, the world is on a collective pause, allowing time for reflection/introspection like never before.

As a result we’ve decided to full pivot to be an online platform that provides a creative outlet for members of the LGBTQ+ community. Unlike other platforms, we invite members of the community who want to share their stories the opportunity to do so, by joining our Writers Cohort. Check out some of the featured stories below.

Explore the site now at MyUmbrella.co.