One of my favorite LGBTQ-inclusive picture books from the past few years has largely flown under the radar here in the U.S., so I’m mentioning it again just as a follow-up book comes out. The first book looks at the power of female friendships as it follows the intertwined stories of four girls from childhood into adulthood; the second follows four boys and gives us insight into not only male friendships, but also societal pressures around masculinity. There are queer characters in both, along with a message of unconditional allyship. 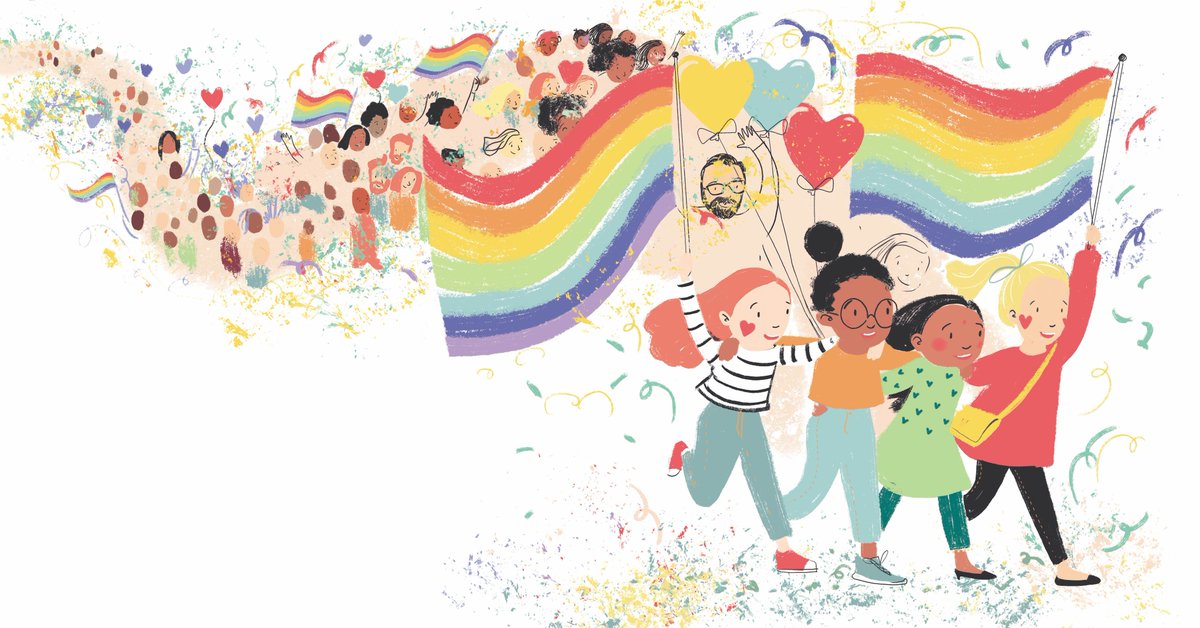 The Girls, by Lauren Ace and illustrated by Jenny Løvlie (Rodale Kids), introduces us to four girls, “as different as they were the same” and “the best of friends.” The girls differ not only because of their racial identities (one is Black, one South Asian, and two White), but also because of their interests and personalities: one is adventuresome, one practical, one a performer, and one full of ideas. Nevertheless, they shared “Secrets, dreams, worries and schemes.” While sometimes a joke went too far, “They knew how to say sorry and learned something from every falling out.” Even as they matured and changed, they supported each other through hardships and celebrated each other’s successes in school and beyond. The softly cheerful illustrations and spare text show this playing out as the girls experience romantic breakups, career moves, and starting families of their own. 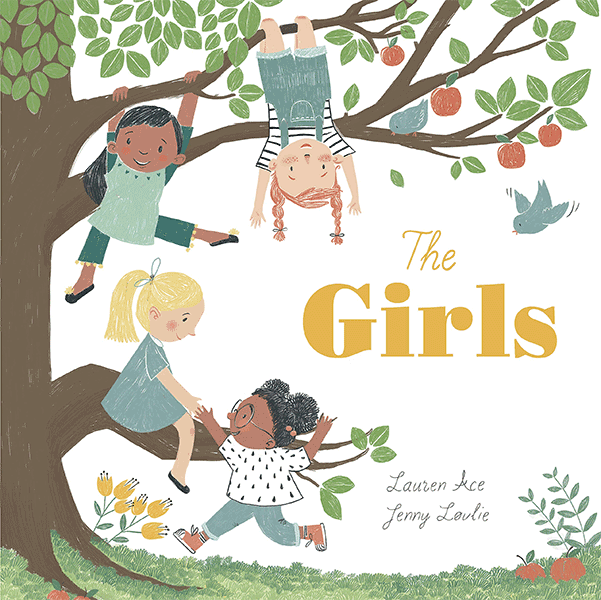 On one page we see all four friends marching together in a Pride parade and we read that they “always took pride in their friendship.” It’s not even clear from this image which, if any of them, are queer or just allies, but on a later page we see Sasha, the Black girl, in a relationship with another woman. There’s no big coming out moment, though; the girls just naturally support each other in their romantic relationships as in so much else. After so many children’s books in which the non-queer characters tease or don’t understand the queer character, it feels like a breath of fresh air to see this image of active support by the friends, where their support isn’t even a question. We also see Sasha, who was always ready with a Band-Aid when someone fell out of a tree, later becoming a doctor; she is more than just her queer identity.

The Girls won the Waterstones Children’s Book Prize in the Illustrated Books category in 2019, and it’s easy to see why. It’s sweet and thoughtful without being cloying, offering a view of female friendship through life’s ups and downs that feels both true and hopeful. (It beat out Julián is a Mermaid for the Waterstones prize; I’m not going to debate the relative merits of each book, since I like them both; I point this out merely to offer some idea of just how good The Girls is, since I’m guessing my readers (who are mostly in the U.S.) may be more familiar with the much-lauded Julián.)

The Boys (Caterpillar Books/Little Tiger) similarly follows the lives of four children—boys this time—with very different interests and racial identities. The story isn’t a mere gender-swapping of the same narrative, though; as Ace said in an interview at The Bookseller, she “drew on works about toxic masculinity” to show how messages about masculinity might have impacted her male characters and their relationships. We watch the boys in childhood as they became friends and “were a team,” then drifted apart as they developed separate interests and sometimes competed against each other. “For a little while the boys enjoyed standing out on their own,” we read. Yet “without the others, each of the boys soon felt as though he had been swept out to sea…. The boys knew they had to be able to talk about their feelings… but it wasn’t easy.” 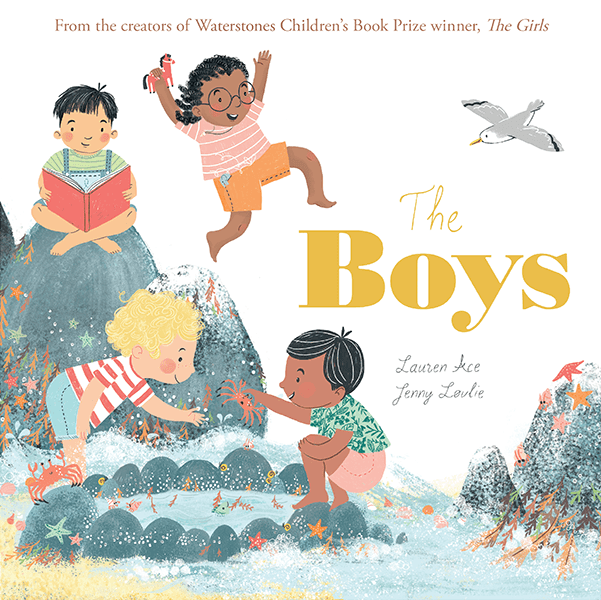 Eventually, though, they “learned to be patient and kind with one another again,” even as each charted his own path. The boys, now men, are there to lift each other up when one is sad; we see three of them comforting the fourth upon the death of a pet. We also see one of the men marrying and starting his own family with another man; the other three friends have active parts in his wedding as we read, “And although their lives had taken them to different places, the men came back together to share their happiest times.” A final scene shows them all playing together at the seashore with their own children.

This is a lovely and perfectly understated examination of masculinity and friendship. As in The Girls, their support for the one who is queer is unquestioned and unremarkable (which actually makes it rather remarkable). In addition, one boy is the son of Sasha and her spouse from The Girls; this isn’t stressed, but careful readers will recognize the moms in one scene.

Both books also offer something else rarely found in books featuring LGBTQ children: a glimpse of a positive future as an adult. The queer characters grow up to have careers and families just like the others. Not that all queer people should feel pressure to have families; but it’s good to see this portrayed as a possible path. Similarly, while we shouldn’t turn a blind eye to the obstacles that LGBTQ people (and marginalized people generally) may face in education and employment, not every story has to be one of struggle and oppression.

With insightful and inspiring looks at lifelong friendships across many kinds of difference, these stories should be valued by queer and non-queer readers alike.

The Girls, originally published in the U.K., is available in the U.S. through Amazon, Bookshop, and other online (and offline) retailers The Boys is unfortunately not directly available in the U.S., though it may be bought from the U.K. via Amazon.co.uk or Book Depository (with free worldwide delivery). My sources tell me that the U.S. publisher of The Girls, Random House Children’s Books (which owns the Rodale Kids imprint), has not yet picked up The Boys for U.S. publication. If you’d like to see it sold directly in the U.S. (so it can more easily reach readers here), drop them a note: you can find them on Twitter or Instagram.

(As an Amazon Associate and as a Bookshop Affiliate I earn from qualifying purchases.)