Kyle Lukoff, author of the Stonewall Award-winning When Aidan Became a Brother and the Max and Friends series (both about transgender boys), has just published his first middle grade novel. That in itself should be enough for you to go read it immediately. If you need more convincing, though, or just want to know a little more about it, however, here’s a review. 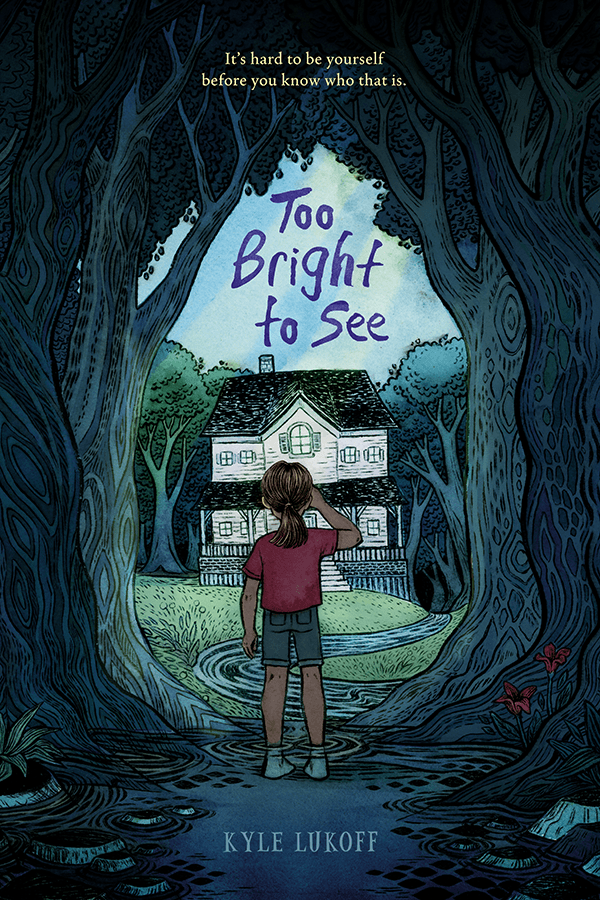 Too Bright to See (Dial Books) is told from the first-person perspective of 11-year-old Bug, and is a coming-of-age story and a mystery rolled into one, interlaced with themes of friendship and family. Bug and Bug’s mother, both dealing with grief over the recent death of a beloved brother and uncle, live in a house that is haunted—and the ghost just might be trying to tell Bug something.

Bug is also about to start middle school and trying to figure out what that will be like. Bug’s best friend Moira is focused on clothes and makeup and thinking about which boys are cute. Bug complains to Mom that that’s all Moira and the other girls want to talk about—but then reflects, “It’s more than that, really. They seem to fit together like puzzle pieces, and I’m a shape cut out of cardboard. It looks right if you squint, but it can’t snap into place.”

Even in his picture books, Lukoff has had a knack for thoughtful phrasing like that, and his skill and lyricism show even more on this bigger canvas. Although Bug is introspective, Lukoff manages not to let that bog down the pacing. The mystery of the ghost keeps the story moving along as it interweaves with Bug’s self-exploration. There’s more here, too, about how people move on—or don’t—in the aftermath of a loved one’s death, yet Lukoff uses a light touch and keeps the story from feeling morose.

Yes, there are queer characters, and Lukoff, a trans man himself, handles them as deftly as ever. I’m being careful in discussing them, however, in case folks don’t want spoilers. My next two paragraphs will do so to some extent, though, so I’ll write in white-on-white; click and drag over the area if you want to see it. Yes, Bug is transgender, and his gradual realization of this forms part of the plot. Bug doesn’t know he is trans at the start of the book, however, and even asserts at one point that he isn’t. He knows what “transgender” means, though, but the oft-said phrases, “trans men are men” and “trans women are women” feel too definite for how Bug feels, “like an uncomfortable, misshapen, squishy humanoid.” Bug’s slow evolution contrasts with that of transgender characters in some other books who have always felt like a gender other than the one they were assigned, but might not have had the words. Bug has had the words; he just hasn’t realized that they apply to him.

Eventually, though, Bug comes to identify as a transgender boy on his own terms. He’s not into sports. He knows that some boys wear nail polish and makeup. “Maybe I’ll want to be that kind of boy,” he ponders at one point. He risks buying a pink shirt from the boy’s department, even though he’s shunned that color before, because “it’s different now that people won’t look at me and see a girl in a pink shirt.” Here, too, Lukoff counters the narratives in many books with trans characters, which often show them embodying stereotypical behavior and clothing of their lived gender. He thus invites us to broaden our assumptions about what it means to be trans—and what it means to be any gender. And while he shows Bug’s hesitancy in coming out to Moira and to his mom, he also shows them as fully accepting. At a time when trans youth are under attack more than ever, the last thing they need is a book that will reinforce fears of rejection. Lukoff chooses instead to show joy and support, and to leave the scary parts to the ghosts.

I’ve deliberately left out a few plot points even in the spoiler section above, though, so there will still be something for all readers to discover. Add this book to any middle-grade bookshelf—but don’t let the age category stop young adult or even adult readers from picking it up, too.