GayCities encourages you to stay safe during the Covid 19 pandemic. If you choose to travel, we recommend that you follow all CDC Travel Guidelines and adhere closely to all local regulations regarding face coverings, social distancing and other safety measures.

Famed for having one of the largest per capita LGBTQ populations of any city in the U.S., Key West is cherished by many for its welcoming and inclusive vibe. ‘One Human Family’ has been the official island motto for decades.

Despite its compact size (2 x 4 miles), it offers a range of attractions, not to mention some iconic selfie opportunities.

GayCities offers some of the best places to strike a pose on a visit to this beautiful, tropical getaway.

The Southernmost Point Buoy is literally the southernmost point of the United States. The colorfully painted buoy was established at the corner of South Street and Whitehead Street in 1983 and has since become one of the most photographed spots in Key West.

Pictured above at Xavier McKnight (right) and his boyfriend, Thomas Burchim.

“I’m actually a Florida Keys native,” McKnight (@xaviermcknight) told GayCities. “I was born in Key West, which makes me a “saltwater conch” and raised about an hour away in Marathon, Florida, which is the heart of the Florida Keys. I moved to NYC six years ago to pursue an acting career.

“My favorite thing about Key West is the sense of community. The locals are very sweet and greet everyone with a smile and a friendly ‘Hello!’ If you ever visit Key West and are looking for quality queer entertainment, be sure to check out Aqua Nightclub for incredible drag performances and the Waterfront Playhouse for professional Broadway caliber shows!”

Marilyn Monroe in front of the Tropic Cinema

You’ll find this beautiful retro-style movie theatre at 416 Eaton Street, in the old town district. It’s hard to miss the neon signage against the starry sky, or the statue of Marilyn Monroe outside. She’s posed above an air grate, like the iconic scene in the movie, The Seven Year Itch.

One of the area’s most beloved coffee stores, there are actually three Cuban Coffee Queens in Key West. However, it’s the original, waterfront branch at 284 Margaret Street (near the ferry terminal for Fort Jefferson and Fort Myers) that remains the most photographed, thanks to its iconic Key West mural. The image was originally painted by the artist, Letty Nowak.

This photo shows Instagrammer @valdeznoel25, from California, who visited Key West for his 28th birthday late last year and tells GayCities he loved going to the beach and the amazing views offered by an ocean cruise.

From the top of Key West Lighthouse

You can see the Key West Lighthouse from almost everywhere in town, as it’s the tallest landmark in the old part of the city. You’ll find it at 938 Whitehead Street, in the neighborhood known as Bahama Village.

“It was my first time in Key West, and I stayed at Island House,” says Ross Bynum (@therossbynum), from Houston, Texas, pictured above. “The food around the island is fantastic, and that was the biggest surprise. There are lots of mom-and-pop restaurants that are amazing. I had hogfish for the first time and it’s a must-try.

“The other part that was so great was the people I met. Everyone was so friendly … a group became friends, hung out over the weekend, and regularly text and plan on heading back soon. It really was a relaxing, great time: just the right amount of relaxing and fun. And, the clothing-optional places are awesome!”

On the Rainbow Crosswalks

The Key West Rainbow Crosswalks brighten the iconic intersection of Duval and Petronia Streets at the heart of the LGBTQ bar and club scene. The crosswalks were first laid down in 2015, but following repaving of the area, permanent, more vivid crosswalks were installed in summer 2020.

“I love that Key West isn’t afraid to show their love and acceptance!” says travel Instagrammer Angie Cox (@thelovelyescapist). “As we walked down Duval Street, there are rainbow flags above nearly every business and there’s even a rainbow crosswalk at Duval St. and Petronia St!⁠
⁠
“Key West also has an amazing drag queen scene. You can catch a show at Aqua, La Te Da, or 801 Bourbon Bar (the pink building behind me in the photo).” ⁠

Outside the Tennessee Williams Exhibit

Key West has provided a warm and welcoming refuge to many LGBTQ writers, artists, and other creatives over the decades. One of its most famous residents was Tennessee Williams, the Pulitzer Prize-winning playwright behind such classics as A Streetcar Named Desire, and Cat On a Hot Tin Roof.

Williams began visiting Key West in 1941 and bought a home at 1431 Duncan Street in 1950, which remained his home until he died in 1983. The Tennessee Williams Museum can be found at 513 Truman Avenue, in the historic old town. You can read all about Williams’ life and check out a wealth of old photos, rare newspaper and magazine articles as well as many artifacts, including one of his old typewriters.

Out front, on the porch, you’ll find a life-size cut-out figure of Mr. Williams, which is a popular spot for selfies.

For the latest health and safety protocols in The Florida Keys, visit fla-keys.com/gaykeywest.

So: I know Christmas might not be your holiday, or that you might not be feeling particularly festive right now. I know this year is… this year! But hear me out: two days ago, I drove to a body of water that has been largely deserted since the pandemic began, and I met a few loved ones there at a very safe distance, and we counted down and then jumped off a long dock into very, very cold water. It was painful, and invigorating, and somehow exactly what I needed at the end of this long, strange year.

I know this won’t be the case for everyone, because things are HARD, but I’ve found an unexpected gift in 2020, something about freedom from tradition, or obligation — the chance to make new kinds of memories, to pare down my connections and experiences to their bare bones and ask myself what I want and need. And sure, I want to hug my loved ones, more than anything — but until then, the shared sensory overload of a cold water plunge will do.

So this week, I hope you find something that makes you feel held by the universe, something that helps you reset. I’m so glad we’re here together, wherever here is for you today. YOU are a gift, and I love you!

Shelli Nicole helped us remember what it is to dance.

This was quite possibly my favorite Autostraddle post that has ever existed: The Elf On The Shelf Is A Cop: We Need ‘The Anti-Fascist On The Bookcase’.

Valerie Anne reviewed the teen version of Lost that I hated and loved and couldn’t stop watching, The Wilds.

And then there were your comments.

On Come Vibe With Me: A Little Less Conversation: 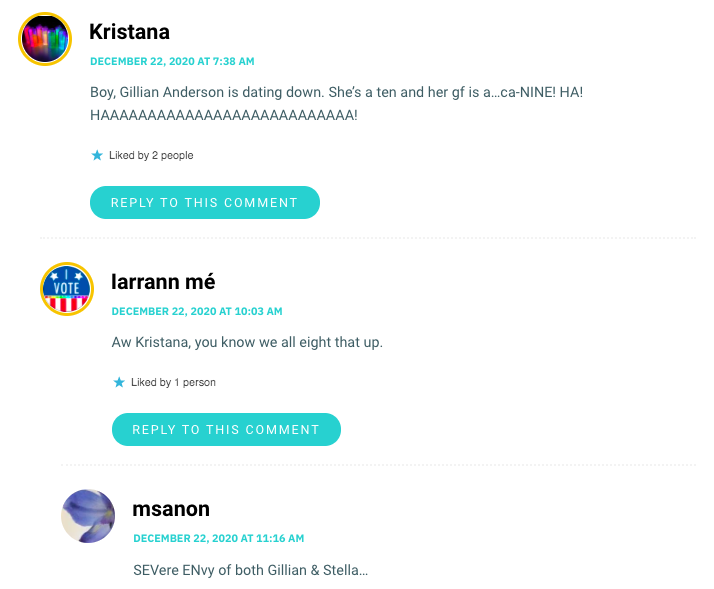 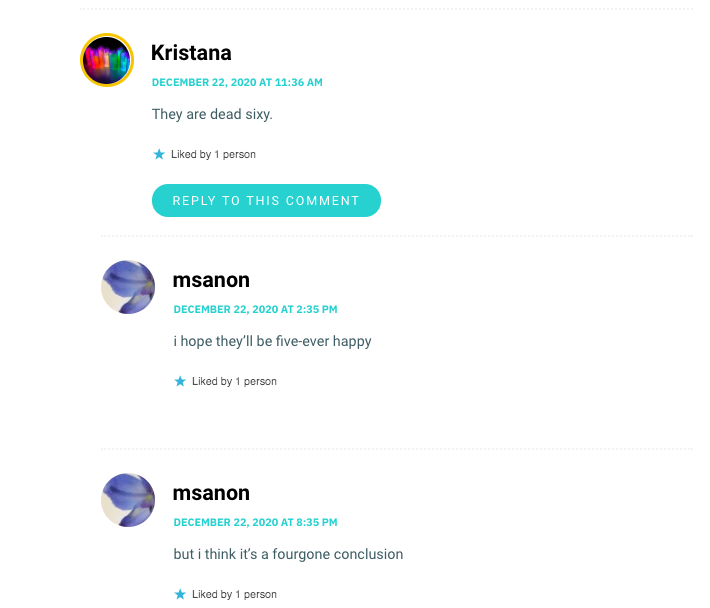 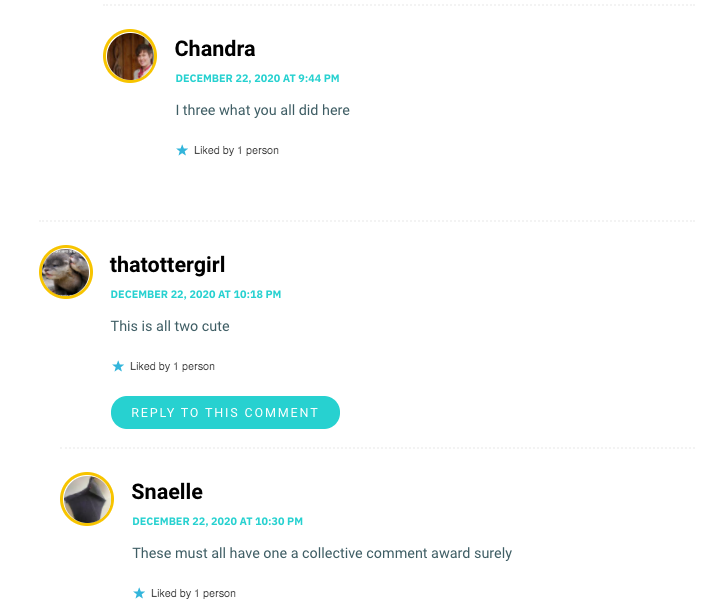 The Playtime Award to Ar Grass: 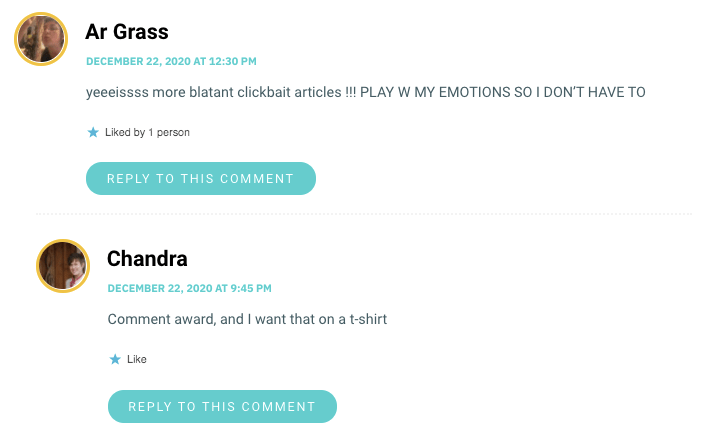 And the Super Dog Award to Blackmar: 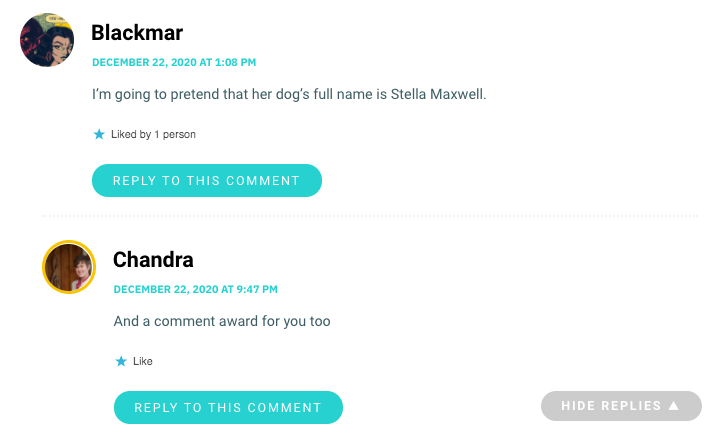 On Amazon’s “The Wilds” Brings Lesbians to a Deserted Island:

The Wilds: Zootopia Award to nosidam:

And on Watching “Personal Best” Was the Main Way to Become a Lesbian in the ’80s and ’90s:

See a comment that needs to be here? Let me know! Tag me [at] queergirl.