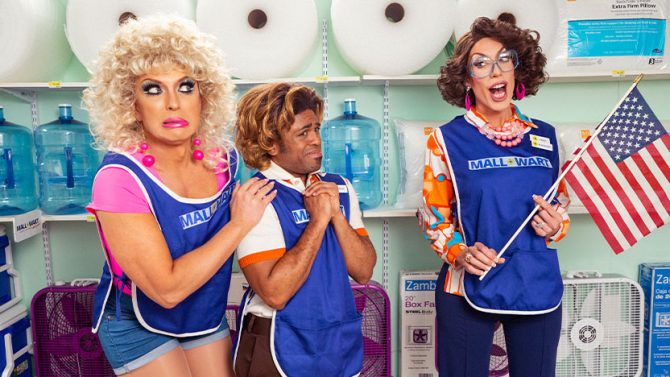 The title says it all, folks.

With COVID-19 having stymied Frameline44–at least in person, anyway–the San Francisco-based queer media arts foundation has done something extraordinary. A second Frameline44 arrives later this month, allowing viewers from all over the world to take part in the celebration of queer cinema, and to view this year’s titles from home. In another charming twist, the festival will host a drive-in screening at the Solano Drive-In in Concord, CA on September 17. The title on the docket: the new slapstick comedy Sh*t & Champagne.

Related: ‘Buck,’ ‘Disclosure’ and ‘My Mom’: Meet the winners of Frameline’s film competition

Sh*t & Champagne takes its cues from 1970s exploitation schlock movies, which often featured ridiculous action, ridiculous costumes and even more ridiculous plots. The film follows stripper Champagne Horowitz Jones Dickerson White (played by drag queen Darcy Drollinger) on the run from a criminal enterprise. When the cops refuse to investigate the murder of her sister, Champagne dives head-first into a criminal underworld. There, she discovers a link between the retail chain Mall-Wart and a dastardly plot to conquer the world. Think of it as Girls Will Be Girls meets The Girl with the Dragon Tattoo.