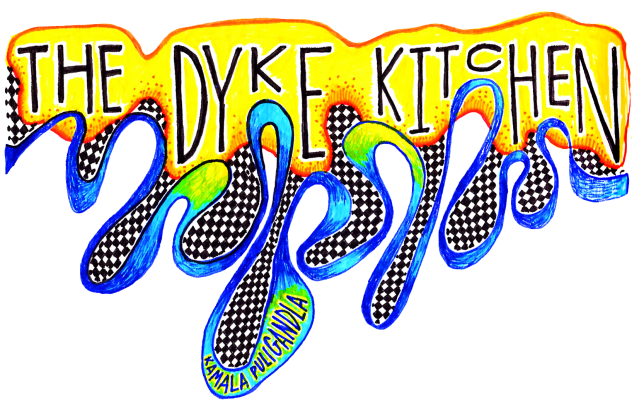 Before the pandemic, my friend Sarah Williams heard that I was doing a cooking series on Autostraddle and suggested that we cook together with Karen Tongson. I was thrilled, because not only had I heard that Tongson is an entertaining LA dyke-about-town, but she’s a brilliant cultural critic & music writer, a Professor of English, Gender & Sexuality Studies and American Studies & Ethnicity at USC, co-host of the podcast Waiting to X-Hale AND a thoughtful and knowledgeable food enthusiast.

So for my last installment of this series, which is about the cooking and eating styles that have come to define my own dyke kitchen, I set up a Zoom chat with Tongson. From opposite sides of Echo Park Lake, we did, indeed, have an entertaining conversation about the ideas and experiences that define her dyke kitchen, what new food quests she’s begun in quarantine, and the qualities of genuinely good taste.

Personal style is such a huge factor in who intrigues and interests me. I like originality and irreverence, but even more, I favor ease. I like when someone’s grace is the common factor that ties together seemingly disparate pieces. And while I’ve spent hours contemplating the way outfits and hair, language and visual aesthetic can convey the confidence and openness that compose that sense of ease, somehow I missed that cooking and eating are an integral part of personal style — one that’s so central to my life, I don’t even see it. I’m not close to anyone who doesn’t share my personal cooking and eating style — what would we even do?

Of course, all of this was brought to my attention immediately when talking to Karen Tongson. I asked her what the through line across her work is, and how it ties into food. “It’s about how I’ve experienced intimacy and how it’s been forged in my family and how food is a way of mediating closeness, even if you have difficulty communicating otherwise,” she replied. “But the answer that is both intellectually true and also physically true, is simply the question of taste, and what taste means. Taste is a set of aesthetic proclivities and judgements that distinguish us and how we form ourselves in many respects, along the axis of race, class, location, identity. And my own taste is eclectic, to say the least, it’s very much about high and low, and ‘Give me as much as I can to taste.’”

“Give me as much as I can to taste” is a lifestyle with which I’m familiar. Tongson goes on to point out that in all of her work, what she’s aiming to do is challenge the notion that what defines “good” taste is a narrow sense of refinement or elevation, that this limited scope prevents us from accessing real pleasure or from exploring a wide range of experiences in the world. It feels like a queer way to approach taste. It’s not about learning to like anything in particular, it’s about appreciating the things that, as Tongson puts it, “aren’t dignified on the surface” and pulling from the vast range of memories and experiences that move you. It’s about looking for connection in the unexpected.

Variety Is The Spice of Life

Much of Tongson’s eclectic taste comes from her childhood, growing up in a family of musicians. In Manila, her grandmother had people over every day to play mahjong and there was always pulatan, lots of food to graze on. After her family finished performing at shows, they gathered around to eat. “Musicians would come over and my uncle would grill at midnight, like mussels with a little soy and butter.”

Those gatherings were one piece of her formative taste memories, but then Tongson moved to the U.S. when she was five years old, after her mother got married to her stepfather. “I can recall with clarity the first time I had KFC…We were in Honolulu…and I’d never had that kind of crispy fried chicken before. And I was like ‘what the heck is this?’ I’d never had mac n cheese, I’d never had mashed potatoes with gravy, and I remember distinctly how obsessed I became with those things. I’d had Filipino fried chicken, but it didn’t have a batter like that.”

So Tongson added fast food — she was also enamored of McDonald’s and Long John Silver’s — to the repertoire of her delicious experiences, which stood in stark contrast to another new kind of American food: the ‘70s health foods that her parents generally preferred. “My parents were young, they were hippies and they were doing yoga…There were alfalfa sprouts in my sandwich when I was six and I hated it!” she exclaims.

Tongson also travelled with her parents — her mom was a singer and her dad was a pianist. “We stayed in Singapore for six months when I was eight years old and lived at a hotel because they had a gig there.” They had a per diem at the hotel restaurant and could eat whatever they wanted. “That’s where I had my first Belgian waffle, my first steak with Maître d’Hôtel, that herb butter — I was like ‘waaahhhhh!’— and my first steak frite was there.”

But there was also the commissary where the hotel workers ate local food. “So there would be spicy-ass prawns with the head-on, curries — I tasted mutton for the first time in Singapore…So that’s what we’d do when my parents weren’t performing, we’d go around and eat at all times of night. It was a crazy and fun, but weird childhood. It was very much feast or famine.” When her family wasn’t living large on on hotel per diems, Tongson recalls the simple meals of picadillo and chicken livers that they had over and over again, that she got so sick of. “Those logs of 75% ground beef, like a Duraflame,” she says shaking her head.

Cooking In Her Own Style

This gave me such a beautiful picture of how Tongson developed her own sense of taste. So I wanted to know what, as an adult, she was doing in her own kitchen with this arsenal of diverse flavors and dining experiences still very present in her memory. I, for one, do not remember the first time I tasted KFC, but I’m positive it was with my mom, when my dad was not present, I have simply always known it to be delicious.

Tongson and her wife, Sarah Rebecca Kessler, have been together for 10 years, and Tongson tells me, “Early on we established that she’ll have her ‘Western’ breakfast and I’ll have my Asian breakfast.” Tongson tells me that in addition to silog — a type of Filipino breakfast with rice, a fried egg and meat or fish — instant ramen is a big comfort food for her. “You know all the different varieties you can get at Ranch 99 or Seafood City, and sort of gussying it up. I get up first thing in the morning and cut up some greens, bok choy, boil an egg, and if I have any leftover protein, slice that up and put it in there. It’s a humble ramen, but by the time I’m done with it, it looks like a version someone would pay $15 for.” I laugh, because I’m reminded of a post I wrote on exactly this method of adding frills to instant noodles — only I hadn’t thought that of this as breakfast before. Tongson adds that, her favorite flavors are ones that are notably less popular among Americans, “like gamjatang, Korean pork neck stew, that’s the best!”

Other quarantine staples for Tongson involve German breakfast, which tend to feature the wide variety of mustard tubes that she’s brought back from Germany; Niçoise salad; her quest to improve her thai crab omelet technique; and the tinned fish she’s been hoarding from when she and Kessler were in Spain last summer — like mussels in escabeche from Espinaler and Ventresca tuna belly. Tongson tells me a story about a glass jar of anchovies that wasn’t strong enough to survive the journey home, and left her soaked in anchovy oil.

What I love hearing most, are the clever ways that Tongson pulls together whatever ingredients she has, to arrive at a creatively tasty, but unpretentious dish. “So we defrosted some chicken breasts, a humble chicken breast,” she starts to explain. The everyday cooking Tongson does now, she learned in grad school, in heavy part from Jamie Oliver’s show The Naked Chef. So she tells me about a riff she’s planning on a dish he makes with chicken and chorizo in a lemon sauce, but instead of chorizo, she’ll cook down pepperoni with mushrooms, add the chicken and throw some lemon and nice gravy from Kismet (frozen from thanksgiving) over the top — though on another day, it’s just as likely to be little containers of Jollibee gravy from the freezer.

What can be said about Tongson’s personal cooking style is that it relies on saving the ingredients or parts that traditionally, institutionally have less value — “something that you think is burdened by indignity, cheapness and trash” — and finding her own kind of perfect application for them that proves otherwise. “Sometimes it is relevant to bring in the conversation that Nietzsche started, in relation to Britney Spears,” she says with a laugh. “Maybe it wasn’t meant for that, but actually there’s something [when they meet] that would enhance both.” When I ask her how she came to know that this was a skill she has, her answer is frank: “From years in institutions of having to justify myself and the way I do things — that’s why I’m so good at articulating this — because it’s not just taken as mad genius, I have to justify myself.”

I very much understand this frustration. I consider how I have made an entire art practice of justifying my existence by writing fiction about my life, because even if I wanted to write something else, this justification is expected of me first. As Tongson talks about people finally understanding that LA is a great food city — not because of the fancy restaurants in beautiful locales, but because of the level of excellence being reached in the seemingly soulless strip malls, where immigrants and people with less money are forced to make do — I understand that what we’re talking about, when we talk about taste, is intuitively trusting the value of people, cultures, identities, histories, flavors and ideas, that are barred from having institutional worth, that are not celebrated or renowned by people in power, for no other reason than prejudice. That if you aren’t accounting for that imbalance, you don’t truly have any taste. Which is not to say that some expensive stuff isn’t great too, it’s just one kind of experience that can stand to be enhanced.

“It’s about not being afraid!” Tongson says at the end of our time together, of the driving force behind all of her life. “‘Bahala na’ is the phrase in Tagalog, ‘whatever happens, happens’.” Which I do think is the simplified ethos of my own dyke kitchen and the trust I have in my instincts, yes, around making delicious food, but also in the rest of my life too.

A go-go dancer captured in the documentary, Queer JapanWhile we continue to…