the things we’ve learned about making an LGBTQ family – Lesbian.com 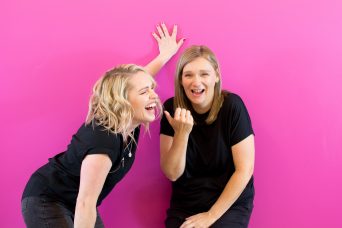 “There is no simple way for LGBTQ folks to have babies. There are so many decisions that we have to make because we have too much of one thing and not enough of the other. Two women have two uterus (or is it uteruses? uteri?), but they don’t have sperm. Two men have all the sperm in the world, but come up short in the eggs and hopper department. And with trans fertility, the questions are more specific to each individual or couple, but that doesn’t mean there are fewer questions to be answered.

In terms of paths, you can embark on the scientific route, but you’ll need to figure out who will carry the baby, whose egg will be used, who will donate the sperm, who will go first. Perhaps you’ll consider using a surrogate, IVF, IUI, or even trying at home with what we like to call the “turkey baster method”. You may think about adopting. If you do, you’ll need to figure out if you want to adopt internationally or domestically or if you want to use an adoption lawyer or private agency. And don’t forget there’s always the option of being foster parents.

Wherever you fall on the LGBTQ spectrum, if you want to have a kid, you’ll have to figure out how to make that baby. And no matter which path you choose, it will cost ya…a lot.

Now, you’d think there would be a lot of grumbling from LGBTQ folks about how hard it is to make families. Well, we’re here to tell you that hasn’t been our experience. The folks we’ve talked to have made thoughtful decisions and were deliberate and intentional at every turn. Instead of the process feeling like a cross to bear, every choice they made defined and illuminated their families in love. And that’s beautiful.”

Robin and Jaimie share about their stories too like that time Jaimie assumed she’d be the one to carry their babies.

“I have always wanted to birth a child. Being gay never once deterred me. It just solidified the fact that I had to partner with a woman who wanted to be a mother and felt no need to carry. Luckily, Anne fit those criteria.

So, imagine my shock when Anne said to me, in a bar, a month after our wedding, ‘Ya know, I think I wanna have a baby.’

‘I’m sorry, what?’ I asked calmly while trying not to choke on the beer I was having trouble forcing down my throat.

My anxiety kicked in. I made Anne promise that if we do this ‘you have a baby’ thing, I still get to have mine. She assured me that she wouldn’t back out of our agreement, we would have two children, no matter what. I forced her to pinky swear her loyalty to the plan religiously throughout the next five years it took to get that second baby in our arms.”

And Robin’s path to parenting had some twists and turns too.

From the moment my wife and I learned about reciprocal IVF (using my eggs but Mary would carry) we were all about it. The idea that we could make a baby who would have my genetics, but literally be made from Mary’s bones, seemed like the coolest science experiment ever invented.

We knew that was how we would create our family.

The downside? It would cost around $26,0000, and we only had enough money to try once. That meant no more IVFs and no more savings account. But we were blinded by the idea that the baby would be made of the two of us, so we forged ahead. It wasn’t until we were handed ten different prescription forms that we began to question our plan. I couldn’t help but think about the fact that the odds of us having a successful pregnancy in one round of IVF were not on our side. Not to mention what we would be putting ourselves through physically.

That’s when my wife said, “Are we going about this the hardest possible way?”

The answer was, “Yes.” We loved the idea of the baby coming from both of us, but we needed to prioritize being parents and being fiscally responsible over needing our baby to be from both of us. These are the decisions us L, G, B, T & Q’s have to make.

This book is an informative, in-depth journey that is equal parts funny, serious, happy, sad, celebratory, cautionary, and powerful. Robin and Jaime compare the journey to parenthood for LGBTQ folks to a roller coaster ride. “At first, you’re really excited. The car chugs up the hill, clink-by-clink, and suddenly you’re wondering when was the last time they tightened the bolts on the tracks? That’s how it is when you’re spending a lot of money trying to have kids in a world that’s not set up for families like yours. You just have to hold on and try to enjoy the ride.”

Excerpt(s) from If These Ovaries Could Talk: The Things We’ve Learned About Making an LGBTQ Family. Copyright © 2020 Jaimie Kelton and Robin Hopkins. All rights reserved. Reprinted with permission from Lit Riot Press.

Lesbian News
LGBTQ Parents: What Do Your Kids Call You?

I first asked the titular question back in 2011, and more than…

Written by 37-year-old queer English writer Yrsa Daley-Ward, who is of both…

Lesbian News
Family Equality’s New ED: “I Have Been Preparing for This Role My Entire Life”